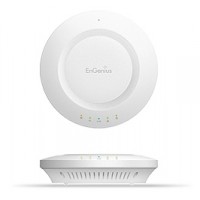 The EAP1750H leverages the breakthrough speed and performance 802.11ac for connecting to laptops and other devices that need to wirelessly stream HD video or transfer large files. The EAP1750H is an 802.11ac 3x3 Indoor Access Point. This high-powered ceiling mount Dual Band Access Point features speeds up to 450 Mbps on 2.4 GHz and up to 1300 Mbps on the 5 GHz band when associated with AC client devices. It can be configured as an Access Point, Client Bridge, or WDS (AP & Bridge) and features a high transmit RF power of 28 dBm transmit RF power on the 2.4 GHz band and 26 dBm on the 5 GHz band for long range connectivity. The EAP1750H includes a Gigabit Ethernet port for connecting to 802.3at-capable PoE Switches and an enhanced receive sensitivity MIMO (Multiple In / Multiple Out) integrated sectorized 3D antenna array. It’s an ideal solution for spacious interior environments such as large homes, small and medium-sized businesses, multiple-floor buildings, hotels, hospitals, and other venues.

The EAP1750H can be configured to operate in several different modes for unique and customized deployment scenarios; as a Dual Band Wireless AC1750 Access Point, a WDS Bridge, or a WDS Access Point.

The EAP1750H features Quantum Beam™ which finds the most efficient signal path to AC-compatible computers and other devices at wireless speeds nearly 3x faster than Wireless N. The Access Point’s Gigabit Ethernet port also offers greater bandwidth capacity and faster data transfers through the network. This makes the EAP1750H an excellent solution for bandwidth-intensive applications such as HD video streaming.

The EAP1750H also features Band Steering, which shifts traffic for Dual Band-capable clients to the 5 GHz band from the 2.4 GHz band, helping to relieve network congestion and maintain optimal data throughput. Multiple EAP1750Hs can also be configured for Fast Roaming when used with a RADIUS server, so employees can stay connected as they roam throughout a building. The EAP1750H is a cost-effective solution for small-to-medium sized or larger companies that need to provide employees with network or Internet access on either band whenever they’re away from their desks or attending meetings in another part of the building.

To unobtrusively blend in with other common building infrastructure appliances, the ceiling mount EAP1750H appears as a low profile smoke detector and can be powered via a PoE (Power-over-Ethernet) from an IEEE 802.3at rated switch.

The EAP1750H also supports wireless encryption standards such as Wi-Fi Protected Access (WPA-PSK/WPA2-PSK) Encryption, IEEE 802.1X with RADIUS. MAC Address Filtering is also included for network administrators to allow or deny network access to client devices (computers, tablet PCs, NAS, smartphones, etc.) according to their MAC addresses. EnGenius’ EZ Controller™ Management Software for Windows, Mac OSX, and Linux (available as a free download) allows monitoring, management, and sequential firmware upgrades of EnGenius Access Points that have already been deployed in the network from the convenience of a desk.