Cost-effective 10Gbps Uplink Capacity
PLANET has made a big leap in the evolution of Ethernet with its launch of the GS-2240-48T4X whose four 10G SFP+ slots support dual-speed, 10GBASE-SR/LR or 1000BASE-SX/LX, meaning the administrator now can flexibly choose a suitable SFP/SFP+ transceiver according to the transmission distance or speed required to extend the network efficiently. They greatly support an SMB network to achieve 10Gbps high performance in a cost-effective way because 10GbE interface usually could be available in Layer 3 Switch, which could be too expensive to SMBs.

Efficient Traffic Control
The GS-2240 switch series is loaded with powerful traffic management to enhance services to business-class data, voice, and video solutions. The functionality includes broadcast, multicast and unknown unicast storm control, and per port bandwidth control. It guarantees the best performance for VoIP and video stream transmission, and empowers the enterprises to take full advantage of the limited network resources. 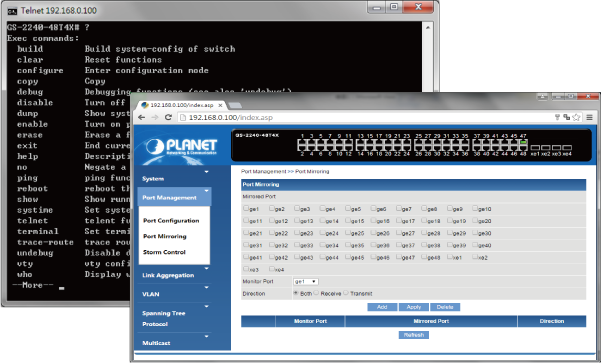