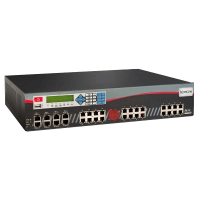 CXE3000 enterprise phone system series supports up to 1000 users and up to 550 concurrent calls in normal office settings.  In hybrid settings it can support up to 800 analog extensions (using Astribank telephony interfaces) which makes it perfect for implementations with hight-density existing infrastructure that is costly to replace, such as in some hotels, hospitals and other organizations.

In comparison with CXR3000 series, CXE3000 series provides additional redundancy features such as RAID1, internal backup and restore (HDD independent), and more, which makes it suited for call centers and other critical applications: